Reentry Hyperplasia of the age 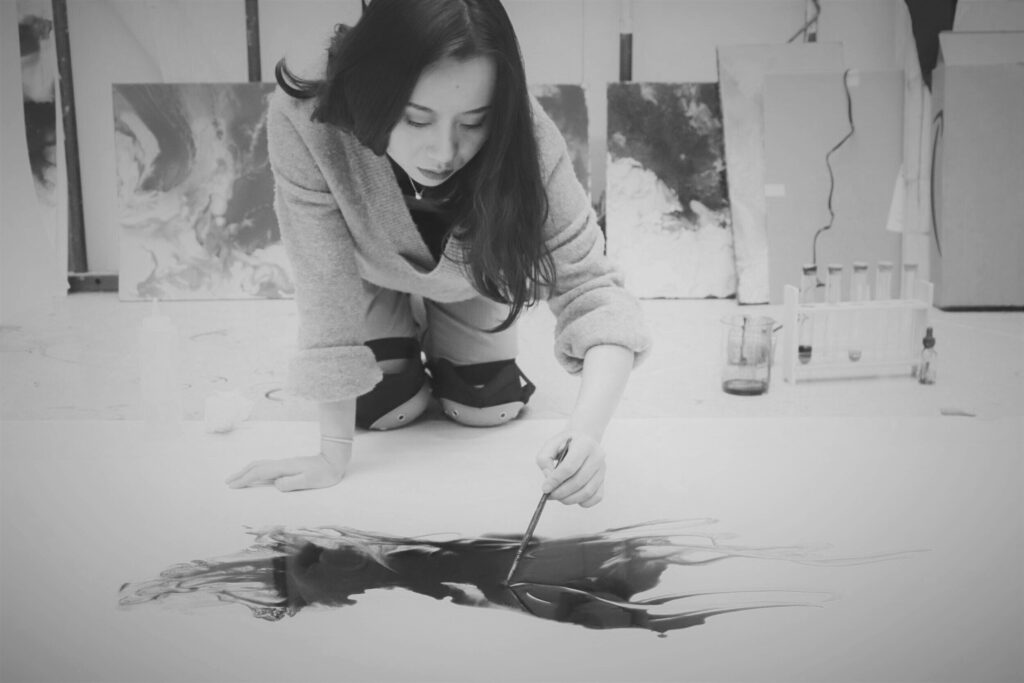 “The yielding process of my current work often shares the similarities with the notion of “parturition”. Women often confront genital cells hyperplasia* due feminine hormone secreted during the process of preparing and creating a new life. In that sense, the form of hyperplasia resembles the multiplication of life and permanently alters its form”

“Reentry”, has been an ongoing series since the year of 2017, and yet it’s been taking a new meaning as a result of the current pandemic. It departs from the reflection between macro and micro and employed the scale to reconfigure and substantialize this symbiotic relationship that we have with the universe.  Since microorganisms live on our physical bodies that shares the notion of the symbiotic relationship as ourselves to the universe.

Xiao’s organic textures were created to invite viewers to experience the work from a conjunction of two perspectives: to look at the mysterious and almost solidified shadows of ink from a distance, as they take on various shapes in a selected woven web; and yet the same protrusions and bubbles of the latent ones in the whole from the microscopic perspective to be viewed in an intimate distance, which serves for the sake of simulating the sense of moist and sticky floating experience of the internal universe of our body in a visual dimension. The smooth and non-angular contour insides of the texture also function to mimic the bodily softness.

All that mutation of the organic texture is wrapped in the pieces of ink surging and forming an irregular circular magnetic field with the surrounding color, which converges holistically to protrude or to break, of which it metaphorizes the notion of hyperplasia. Moreover, “reentry-hyperplasia of the age” brings a series of riddles about the body: pandemic disease, proliferation, hormones and so on, which is closely connected with this flowing energy.

The inanimate flowing pigments that were applied also carries the animate nature as living beings in which the process of creation shares a commonality as the compelling forces of colonization, invasion, and naming. The lines and colors in the process of spreading continuously to narrate and express itself on the land of the large sheet of white space, as if it attempts to colonialize the bright spots into its own body through their own visual language, from which its little bite to bite but not the action of swallowing. Like a microscopic being tries to eat a tiny piece of algae form, abstract art is often beyond the empirical experience. The viewers may find any discernable visual form based on their own experience; thus, the whole process shares the commonality as naming. Insofar as the show aims to deliver an invitation to the viewers’ perception to name or to describe the unknown visual forms with the linguistic instruments, so that my works can occupy a piece of space in their perception, to be-in-their-world.

Only after being named by language can things occupy a place in the human world. It is in this sense that Heidegger ever said that stone is non-world; there is but a barren world for animals; And man is the one that constructs the notion of the world, because humans are talking animals, and thus a being that is enabled to respond to the notion of “being” itself.

With the given form of diffused and squirming color, to visualize a sense of occupying from a few words, sentences, even within letters and expressions, of which all occurs within the attempts to rethink the very nature of our being-in-the-world and our relationship to language; that is, one hopes to think the co-belonging of language and body for the sake of arousing the internal experience of biting the reality by the teeth of language from viewers’ spirits, of that reflects the process of colors’ squirming in my creation; The monolithic white space occupied a space in the visual perception after it’s named by the colors, while the colored works occupied a space in the world of us after it’s named by the viewers’ language.

As aforementioned, the series of work was created to explore a conjunction from two different perspectives to be viewed, the intimate perspective versus the perspective from a distance.

Regardless of the pandemic outbreak or the unknown post-pandemic future, it all shares the commonality of the large-scale painting installation, which is a kind of spectacle from a distance. To observe a collective image becoming a oneness via its generalized contour. Therein, the notion draws a solid boundary to differentiate itself from the idea of “group images”, whereas the “group images” has been dominated one’s perception that pertains to reality: unrelated individuals whom presents their own images and yet reveals the connection between each other quietly. That’s been the way of viewing the societal reality from one’s perspective.

However, after the pandemic outbreak, the view has been altered by the social spectacle from one’s own country. It presents an image to one, of which although people are physically, isolated, while the dimension of expression and images they do not show the posturing of separation, but more tightly become “oneness”.

The notion of “oneness” within this context is disassociated with any of the positive definitions of being “solidarity” and “cohesion,” but simply become one of the dimensions of expression, we seem to enunciate a unified sound to the rest of the world that’s beyond us, as if the direct contact between individuals is reduced by the isolation, therefore, the households, businesses, countries, and so on,  all interact in a “more collective” image, thus it is collective images becoming a oneness.

And this new collective image form also represents the “suppression” of the individuality, from which it makes us to endure the decrease of physical interaction with one another, and we shudder in the suppression while endure the dual torment from physical and mental aspect, and even longing, etc. All these words that seem to be associated with the state of parturition; however, in general, it represents the restless desire and endurance of each individual after being absorbed by the “oneness”. Insofar as, each individual is proliferating in the womb of the collective, to reflect the punchline of the show, The Hyperplasia of the age, our age of pandemic.

The dynamic of hyperplasia with which the unspoken longing is what the work aims to depict is the silenced face of reality. It is the face of “collective images becoming oneness”. From a distance, to view the collective longing from seeing the dark entity as a wholistic image, while from an intimate distance, to view the restless texture, wriggling and mutating in the shadow.

*Hyperplasia: An increase in the number of cells in an organ or tissue. These cells appear normal under a microscope. They are not cancer but may become cancer. (Definition quoted from National Cancer institute.)

About The Artist, Xiao Yang

Xiao Yang is an intermedia artist whose performance series of works utilize nonlinguistic, bodily communication to explore the physical threshold of one’s own body that challenges the social discipline; while the concurrent painting installation series aims to recontextualize the industrial and chemical material into an artistic medium which is catalyzed by her experience at a Bio lab of that the visual form of the micro-organism under the microscope. It serves as the initial reference for the prototype creating process.

Yang’s installation work explores the possibility of illustrating the individual experience of cultural alienation in both physical and psychological spaces into a tangible form. Her work draws inspiration from the micro and macro and employs scale to reconfigure and substantialize this symbiotic relationship that we have with the universe, as the microorganism lives on our physical bodies that shares the notion of the symbiotic relationship as ourselves to the universe. The subverted scale in between the micro and the macro is for the sake of revealing our own relationship to the gigantic universe which is not very much different than the microorganism to us. The fluid, unnamable abstractions often run parallel to the theme of the uncanny as the artist tries to situate herself within a new culture that is becoming more familiar and her cultural roots that are now feeling more removed, operating between being “home-like” and “unlike home” within a shift of personal identities.

Born in Anhui, China and currently residing in Buffalo, NY, Xiao Yang has become an artist that excel in multiple mediums (painting, poetry, performance art and multimedia).  She is an accomplished artist and professor. She received her bachelor’s degree in Fine Arts in Painting and Illustration from Daemen College. In 2019, she received her Master of Fine Arts from the State University of New York in Buffalo. Her artwork has been exhibited in numerous art galleries and public spaces including El Museo, 1045 Gallery, UB Art Gallery, Sugar City to mention few. She also was part of the Stay God exhibition at the Burchfield Penney Art Center, Buffalo, NY. 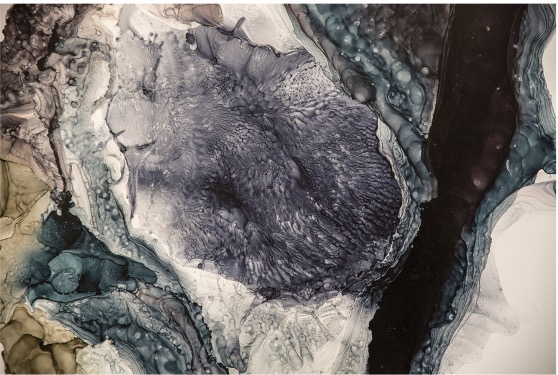 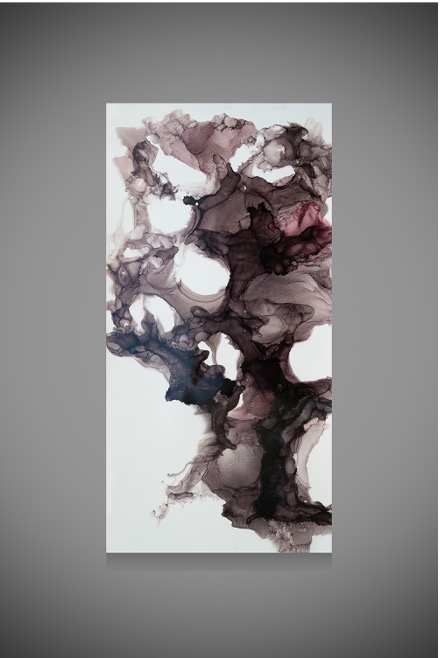