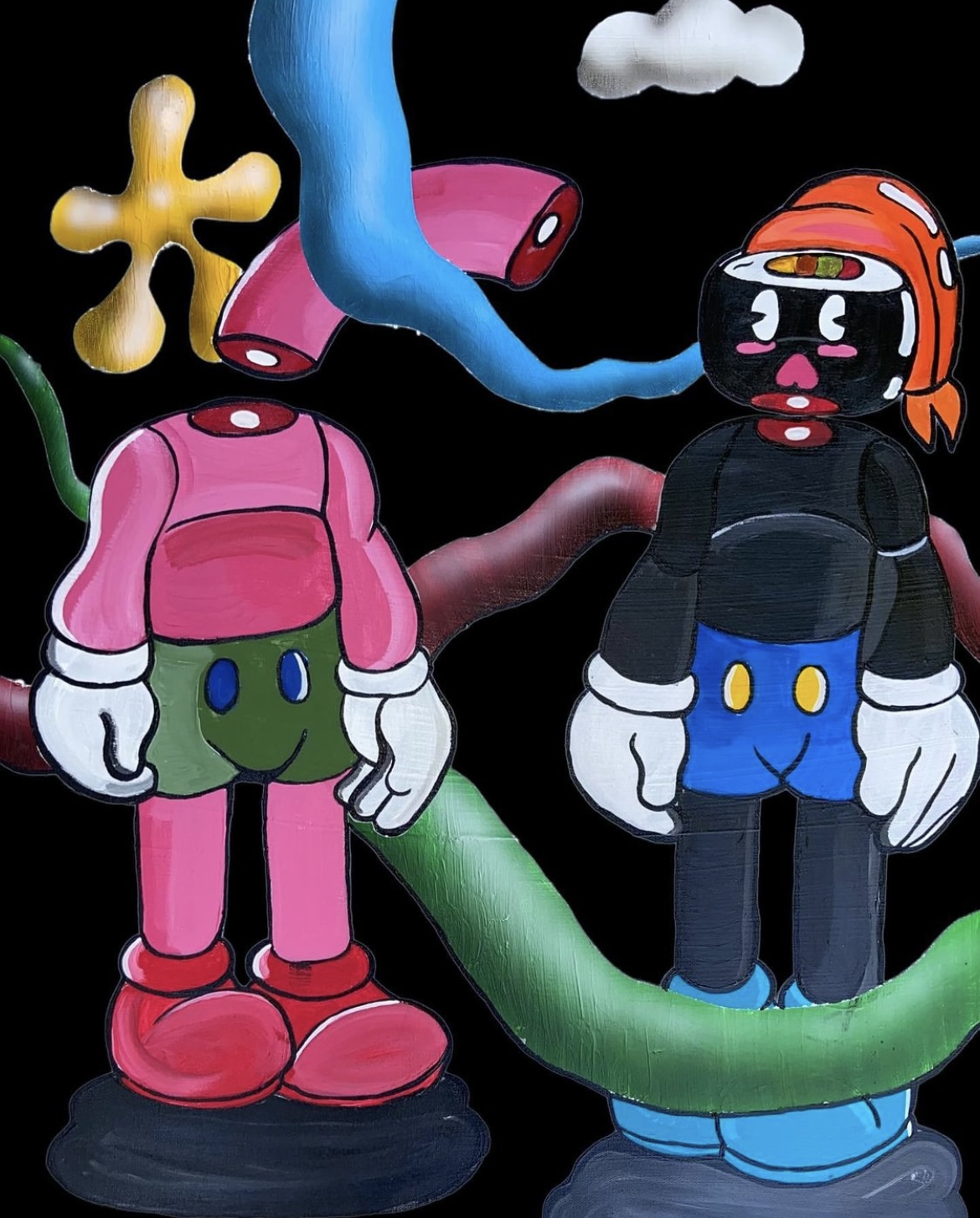 We all can relate to that sweet sensation of nostalgia when reminded of our favorite films, styles, shows, and characters we grew up admiring throughout our childhood. As graffiti artists, Thomas Guttuso (Spoon) and Ahmad Johnson Jr. (Wasabi) collaborate their interests in their first exhibition showing, TIME CAPSULE, they bring to the table a new twist on our fondest childhood memories. Spoon and Wasabi are emerging renowned Buffalo-based artists known for their rework of 70s punk culture. They introduce a new outlook on our favorite animated Disney and Cartoon Network characters through various uses of paint on canvas and wearable art. As Spoon & Wasabi collide their unique street styles, it opens a new perspective on surreal abstractedness through these inspired animated characters.

Wasabi began his ever-expanding brand W.W. (Wasabi World) in 2017 – designing over 500 handmade 1of1 clothing pieces selling out over Buffalo and other regional cities. Wasabi had his celebrated Mickey Gustavo era from 2018-2021, as it rippled waves throughout enthusiasts. During that span, he found a style that continuously flowed with him – the recreation of Mickey Mouse slightly deranged in several individual punk versions. These visions brought an innovative take on the 17th-century punk years, as Wasabi emphasizes the historical reference through raw, deconstructive artistry. He continues to play with mid-1970s inspirations through his growing collective of anime sushi characters, representing the modern times of high fashion streetwear. Wasabi became so accustomed to this vision he proclaimed, “I could do it in my sleep”.

Thomas Guttuso (Spoon) imaginative brilliance has been prominent throughout his years of creation, as he has a niche for experimenting within various paths of innovation. Spoon specifically caught the public eye in 2021 when he collaborated with notable artist DNTWATCHTV at the L.A.A.M.S gallery in Manhattan, where he displayed four of his handmade tufted rugs. Months later, he is found again in New York City showcasing his rugs and canvases in collaboration with high street wear brand – KSUBI. Spoon continues his graffiti designs throughout Buffalo, showcasing his freedom in movement by mastering several forms of visual mediums. In 2021 he showcased life-size sculptures at the local storeroom MetaGama, where he portrayed two distinct fictional characters. These punk symbols were designed into 3D novelties and hand-printed t-shirts as a collective showing. As Metagama soon changed its location, they took Spoons craft with them, inviting him to create a mural piece within the new storefront. The opportunity to commission mural art didn’t stop there, as the Springville Center Arts Center included him in the creation of the gigantic mural piece showcased at their annual Art Crawl.

The collision between these two contemporary artists invites new ideas of aptitude – all while expressing the youth pulling inspiration from the nostalgic grunge of the 70s. 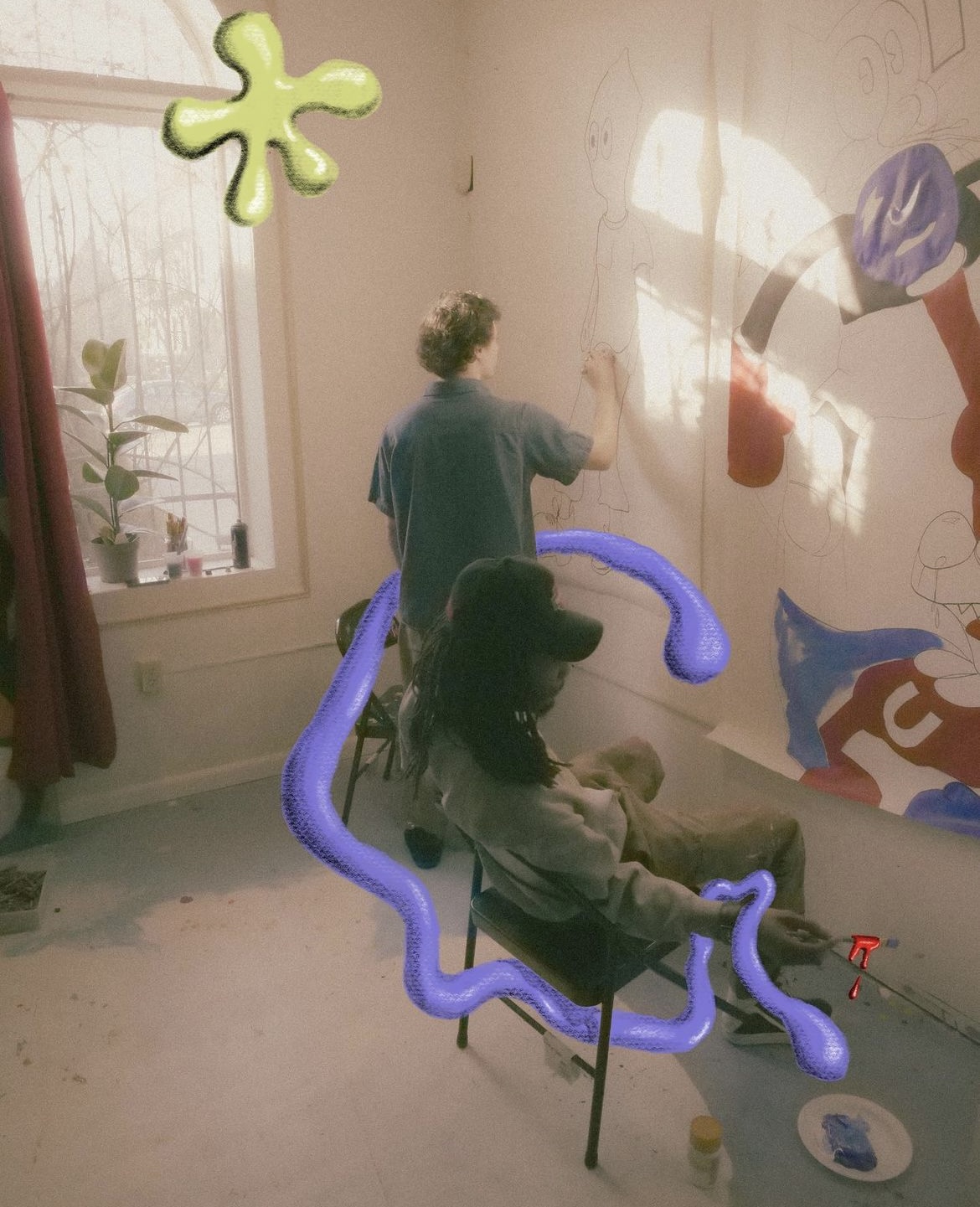 Current Exhibitions: No Weapon Formed and Time Capsule on display until December 18th 2022